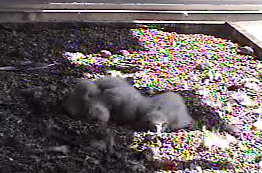 These are George and Gracie's chicks waiting for an adult to bring their next meal. Click on the link at the end of this post to visit the live falcon cam.

George and Gracie are a pair of peregrine falcons that like to nest on building ledges high above the bustle of San Francisco’s streets.

Their romance is a success story.

Until 2009 peregrine falcons were endangered in California. The recovery of the peregrine falcon population is a very rare success. This is only the second time a species has been removed from the state’s endangered list. The falcon population had diminished because of human disturbance and shells thinned by the pesticide DDT (which was banned in the United States in 1972). The chemical accumulated in the birds’ food, contributing to thinner eggshells that were often crushed when the adult birds sat on them during incubation.

At the time DDT was banned, only about five nesting pairs of peregrines remained in California.

Now the California Department of Fish and Game says the peregrine population is at an historic high, and the birds once again occupy their old habitat on the cliffs of California. Additionally, they have also adapted to city living, where they are welcome residents. Among other prey, peregrines eat pigeons, which are pests in many cities.

Peregrine falcons are about the size of a crow and are known for their speed and precision when flying. They can catch smaller birds in the air in spectacular, precise, hunting dives called “stoops”. While in a hunting stoop, some birds have been clocked at 200 miles per hour!

You can visit George and Gracie courtesy of a live falcon cam  that is a project of Santa Cruz Predatory Bird Research Group. Their eggs have hatched and their chicks are in the nest now. Click this link to visit their nest! There is also an interesting diary of the nest’s activities you can read here.